Naturally, the economics blogosphere is afire with talk of the minimum wage.  One of the obvious arguments opponents make is “if a minimum wage hike is so great, why not raise it to $100/hr”?   Rhymes with Cars and Girls describes the course of the discussion:

This argument is a variation of a This Policy Doesn’t Do What It Does argument. I might think that when the government puts a price floor on labor that has an effect – in the only conceivable possible direction for that effect to point – but I’m not allowed to ever say or think so without untangling this effect perfectly from every last variable with a definitive, complete ‘study’. Which is something that would be impossible for humans to do, hence, the minimum wage is permanently fine.

This know-nothing approach also allows the anti-anti-minimum-wage theorist to poo-poo arguments like Well then why not raise it to $90/hour? That’s ‘silly’, goes the logical, calm argument. It’s just silly! What is left unexplained is where the magical inflection-point occurs between $9 and $90. The anti-anti-minimum-wage theorist apparently knows there is such an inflection-point, and must indeed know where it is (or at least knows a lower-bound for it, so as to be able to know that $9 lies below it), but isn’t divulging anything further than that. Pity. But of course this I’m-not-telling-you-where-the-magical-inflection-point-lies issue plagues all This Policy Doesn’t Do What It Does discussions.

Keith Hennessey makes similar points. After a certain level, it becomes obvious that raising the minimum wage would act as a horrific employment-killing price control.  Defenders are making a special pleading that smaller adjustments can interact with other economic feedback forces to keep unemployment from growing (as Card and Krueger observed in NJ and PA fast food establishments) or even decrease it (see Menzie Chinn and others below).

This all reminds me of the Laffer curve.  At confiscatory tax levels the downward slope of the Laffer Curve (higher rate–>lower revenues) is trivially true, even as at is undeniably upward-sloping at very low levels.  Ideologues will tie themselves in knots trying to deny or confirm the truth of Laffer’s insight at any tax level for fear it might be giving hard-won ideological ground at current tax rates.

Just as there is an “optimum” tax rate under Laffer (presuming you believe that maximizing government revenue is a desirable objective, which I don’t), there is, theoretically a ‘clearing wage’ in an economy.  Raising the minimum wage to the unskilled clearing wage will do little damage to unemployment.  As Menzie Chinn shows, there may be a level above the clearing wage where the income effects will overcome the job reduction effects, raise consumption and thereby have a positive impact on hiring.  Others have proposed that minimum wage hikes act as some sort of productivity stimulus, prompting employers to adopt better employment policies and workers to work harder.   This strikes me as ridiculous.  At any rate, raising the minimum well above the clearing wage (or, if you will, the Menzie Chinn-adjusted and/or productivity-enhanced Clearing Wage) will undoubtedly put people out of work.  This all raises two broad questions, one philosophical and one more realistic.

a)On Principle:  is it appropriate at all to set the terms of private contracts?  even if the minimum wage is below the Clearing Wage, what does that accomplish? ( I did read some arguments suggesting that it increased worker dignity, but I came away wondering how that was quantified).  Obviously, the government interference in private contracts train has left the station, but that doesn’t make it right.

b) Isn’t the Clearing Wage different in different parts of the country? Can the federal government even know the clearing wage? Don’t they take a great risk of putting people out of work?

Anyway, here’s a review of some other posts.

The intuitive logic is encapsulated nicely in this cartoon: 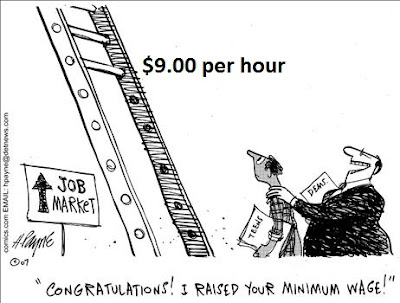