I’ve made reference (in my series of posts on taxes and inequality) to potential reported discontinuities in reported income. I downloaded the CBO’s data on taxes from 1979-2009 and created this graph from the reported figures for the top 1% of earners. It shows their reported cash wages/salaries and their reported business income as a percentage of total reported AGI.  Notice anything about 1986? And then again in 2000?  Remember, this figure is the denominator in nearly every effective/average tax rate calculation you’ve seen:

Percent Shares of Reported AGI for the top 1%. per CBO

There are some v-shaped troughs in wages as a percent of AGI. Some of these relate to recessions, but there was no recession in 1986. What happened in 1986 was tax reform. Prior to 1986 highly paid individuals could reduce their AGI by ‘passive losses’, which included depreciation (non-cash and somewhat theoretical) of real estate. Other types of passive losses worked, like energy exploration. Wall Street had a big business in selling these income shelters. This is the first discontinuity – reported AGI went up without reflecting a significant change in actual income. All else equal, effective tax rates went DOWN, even though we were actually taxing more.

The second thing to notice is the steady increase in business income on individual returns. This reflects the increase in pass-through entities like Sub-S and LLCs. This increased personal AGI even though the income may have existed on a corporate return before. Also, the related deductions move to the personal tax return. Once again, the effect is for individual to pay MORE tax than the previous year but show a LOWER effective tax rate.

UPDATE: Megan McArdle and Veronique de Rugy point me to Scott Winship’s work, which is all over this exact problem, and raises serious questions about the proper conclusions from the Piketty/Saez inequality data. Better, he uses their exact data set: 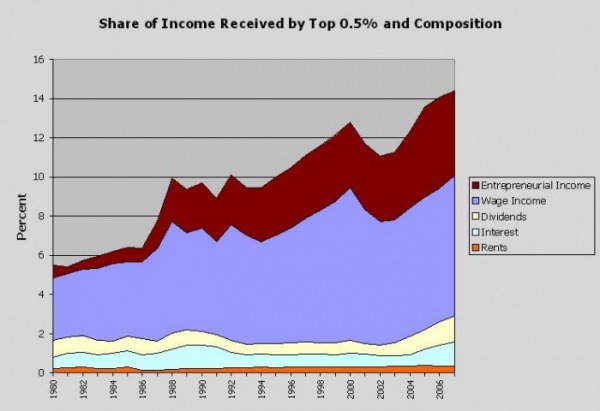 SECOND UPDATE: Greg Mankiw is also wondering about pass-throughs, and offers this graphic: 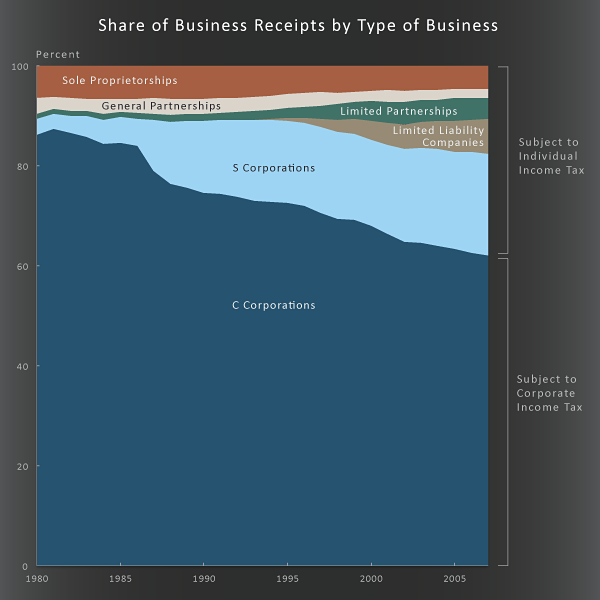